Now that we have recapped all of our Halloween celebrations, I wanted to talk a little more about our Peter Pan Family Costumes. We got a lot of really complimentary feedback on these costumes (thank you!), so I thought I would share how we pulled it off in case anyone out there in the land of Google would like to know. 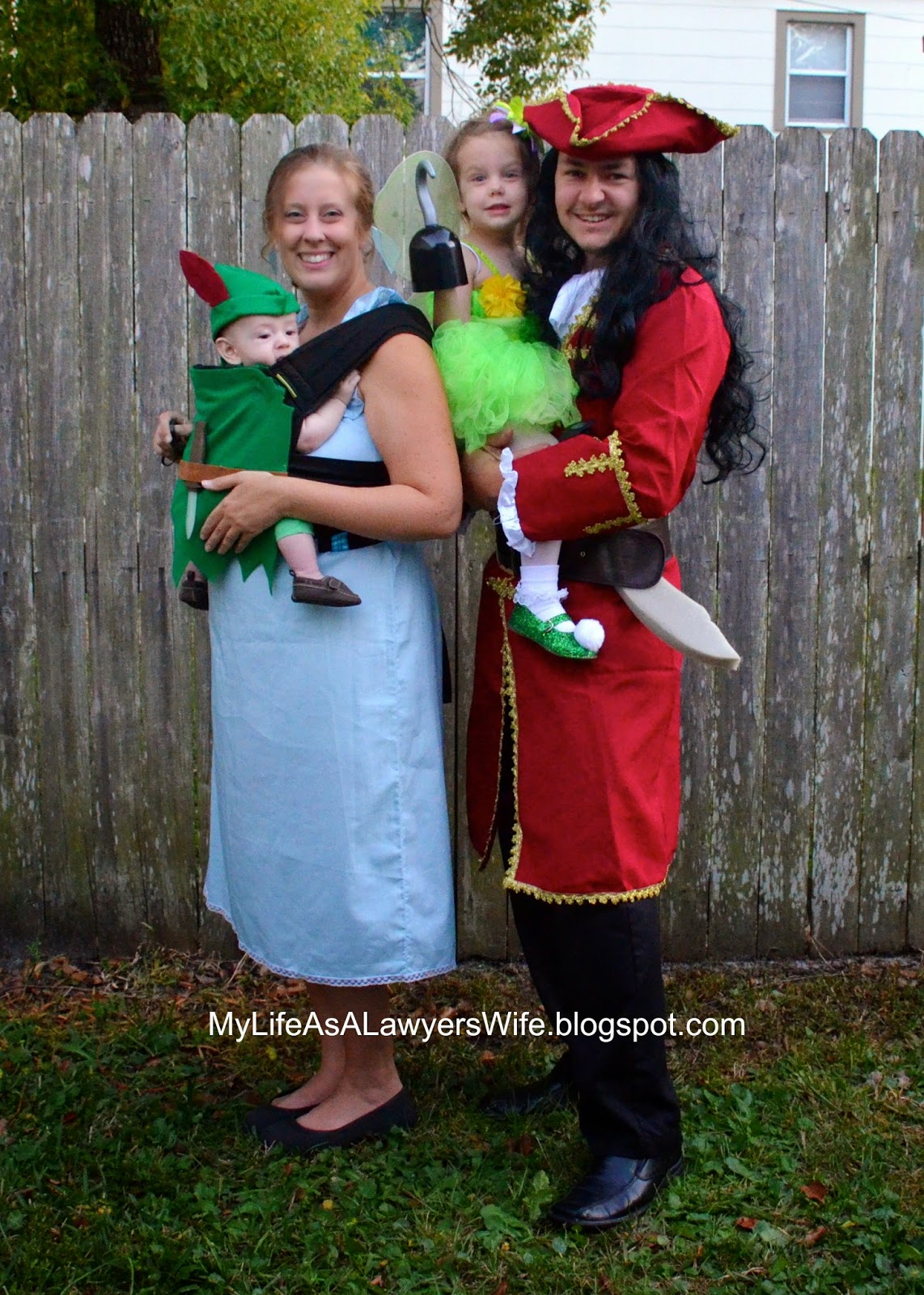 To recap: Three-month-old E.J. was Peter Pan, two-year-old Ellie was Tinkerbell, I was Wendy Darling, my dear husband was Captain Hook, and the family dog was the crocodile with the ticking alarm clock. Three of those five costumes were purchased (I'll share where from at the end of the post), but the Peter Pan and Tinkerbell costumes were homemade, including a babywearing-friendly version of Peter Pan. Let's go through this by character, starting with Peter! 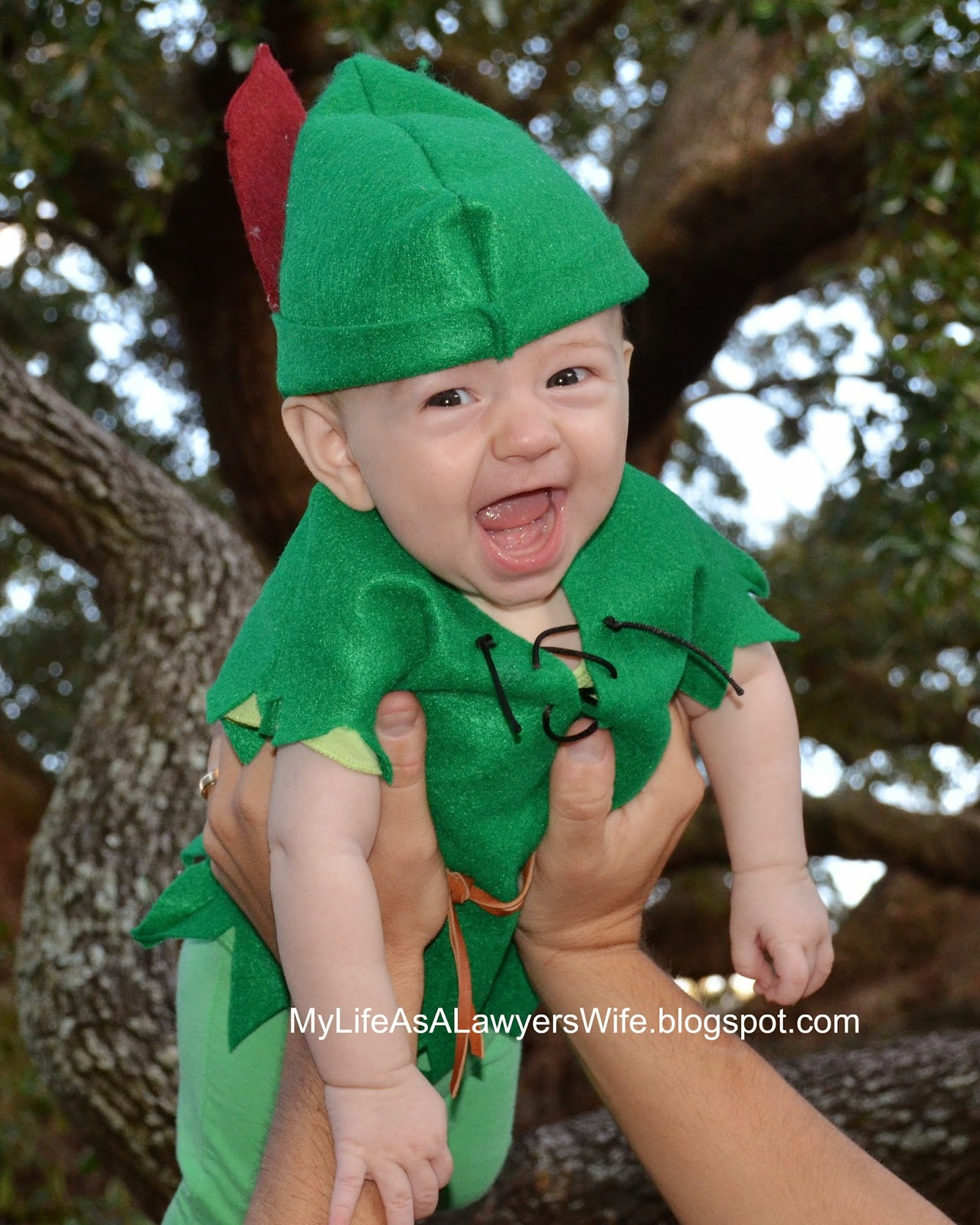 It's not really necessary to reinvent the wheel for the primary costume - I followed a couple of other tutorials I found online, with few modifications. I'll move quickly through these rather than belaboring the step-by-step process; please feel free to see the linked tutorials for better instruction.

Peter Pan's tunic top was made following this tutorial. In general, I purchased a half yard of green felt, folded it in half and traced one of E.J.'s onesies onto it. (I added some extra room on all sides to allow for sewing, but in the end I trimmed up the sleeves and length a decent amount, so the extra allowance really wasn't necessary.) I also cut a straight line up the back and later sewed Velcro onto either side of the cut for easy on-off closures.

My starting point - half yard of green felt folded in half

I then folded it in half again, traced E.J.'s onesie and cut.

Slit cut up the back, Velcro to be added later

I sewed up the sides and the shoulders and cut notches into the sleeves and bottom. I also cut a v-shaped notch into the front neckline and cut little slits on either side to add a black lace detail. The belt was a piece of suede cord found in the jewelry-making section of JoAnn Fabrics.

As for the hat, I followed this tutorial, which was super handy because it even included a printable pattern. The pattern said it would fit a two- to four-year-old, so I sized it down for my infant by taking it in one-half inch on all sides. With this smaller pattern cut out, I was able to fit it on one of the standard felt sheets you can buy at any craft store (though you'll need two sheets - one for each side of the hat!).

The original pattern, with my alterations marked

My smaller pattern fits just right on a standard sheet of felt!

I traced it, cut it out, and sewed the pieces together (along all edges except the long, straight bottom). Then you just turn it inside out and fold up the brim. I cut the feather out of felt and glued it to a pipe cleaner, which I inserted into the hat by cutting slits inside the brim and weaving the pipe cleaner through.

Sewn together, turned inside out and brim flipped up

My size modification to the hat pattern ended up being a perfect fit for my three-month-old, so I didn't need to sew on any elastic or ribbon to hold it on his head, but you may want to do that if the fit isn't quite so snug on your little one.

I also purchased a solid green onesie and green leggings for cheap at a consignment store for E.J. to wear under the tunic, and finished the whole thing off with brown shoes. I think he looked quite dashing! 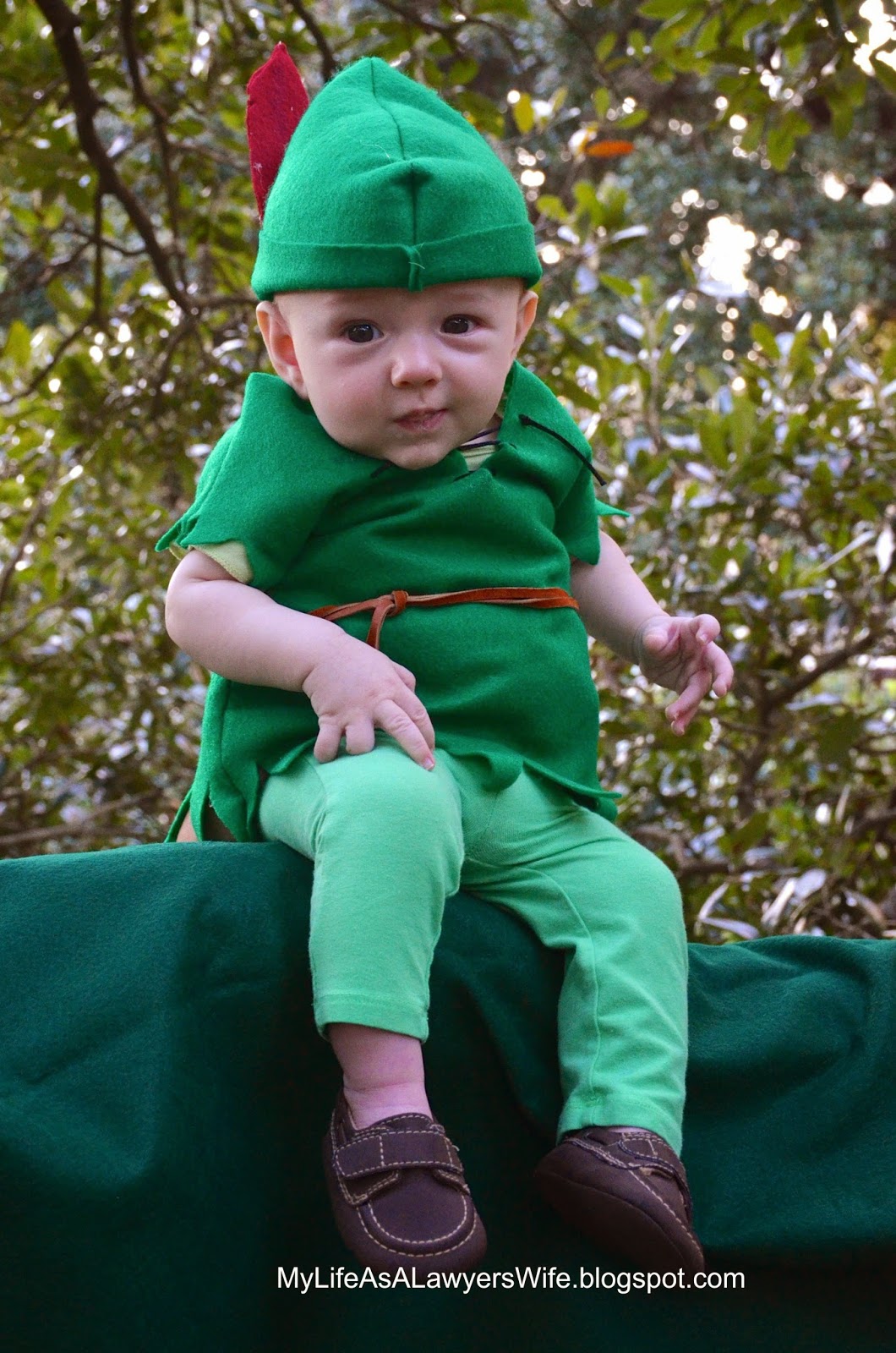 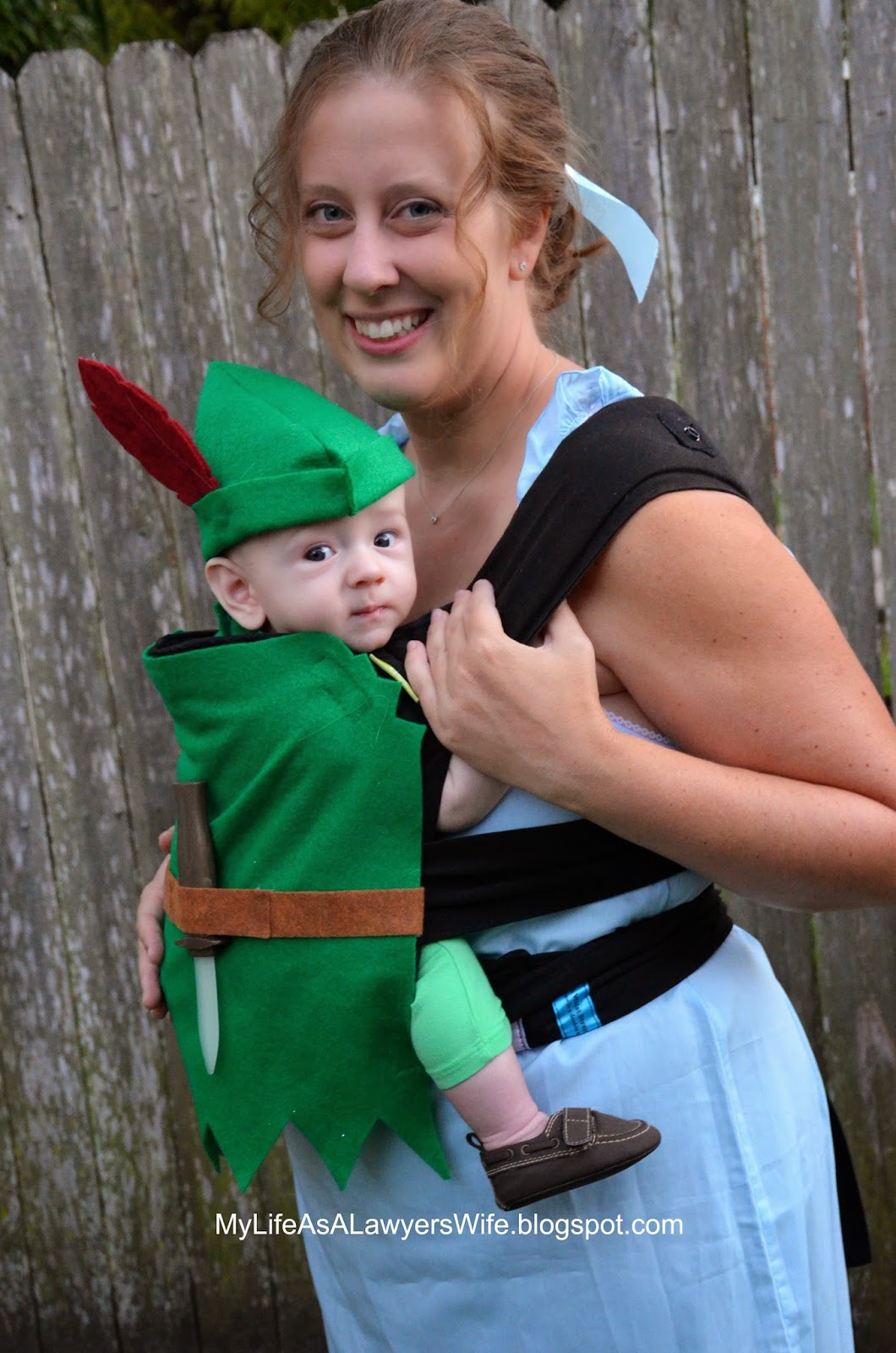 When we went trick-or-treating, I knew I didn't want to have E.J. just sitting in the stroller where nobody could see his adorable Peter Pan-ness, so I decided to deck out my mei tai carrier so that if I wore him, he would still be in costume. This part was my own design, so I'll be a bit more thorough here.

I started by tracing the front panel of my mei tai onto the felt and cutting it out.

I left it a little long to accommodate for the ragged bottom it will eventually have.

I cut my brown felt in strips long enough to cross the full costume panel horizontally, as a belt. I left a little extra on each end to fold over and secure on the back. (Don't place this too low! I erred on the higher side and was glad I did.)

Brown felt in place for the belt

I positioned the toy knife where I wanted it to sit as if it were tucked into the belt, then cut a tiny strip of elastic to hold it in place. I used a few stitches to secure the elastic to the belt. I then glued the belt to the green felt with my glue gun. I cut an additional brown strip to cover the elastic and glued that down as well.

Elastic "holster" for the knife

I then tried it all on with the baby. I put him in the carrier then held up the whole costume panel to see how it would fit. This was very helpful! I was able to see that it was much too long, so I trimmed the bottom considerably. I also determined where I wanted the panel to attach to the carrier and marked those spots with pins.

Velcro pinned to the carrier and sewn to the costume panel

I also cut notches in the bottom of the costume panel and at the "sleeves."

Finished and assembled!
(I actually fold the waist strap underneath once for E.J. right now, which is why it looks like my costume panel isn't long enough)

Ta-da! The result was a costume panel that easily attached to my carrier, so E.J. could still be noticeably in costume even when being worn. With his little Peter Pan-hatted head sticking out the top and his green leggings on the bottom, people easily knew just who he was supposed to be! 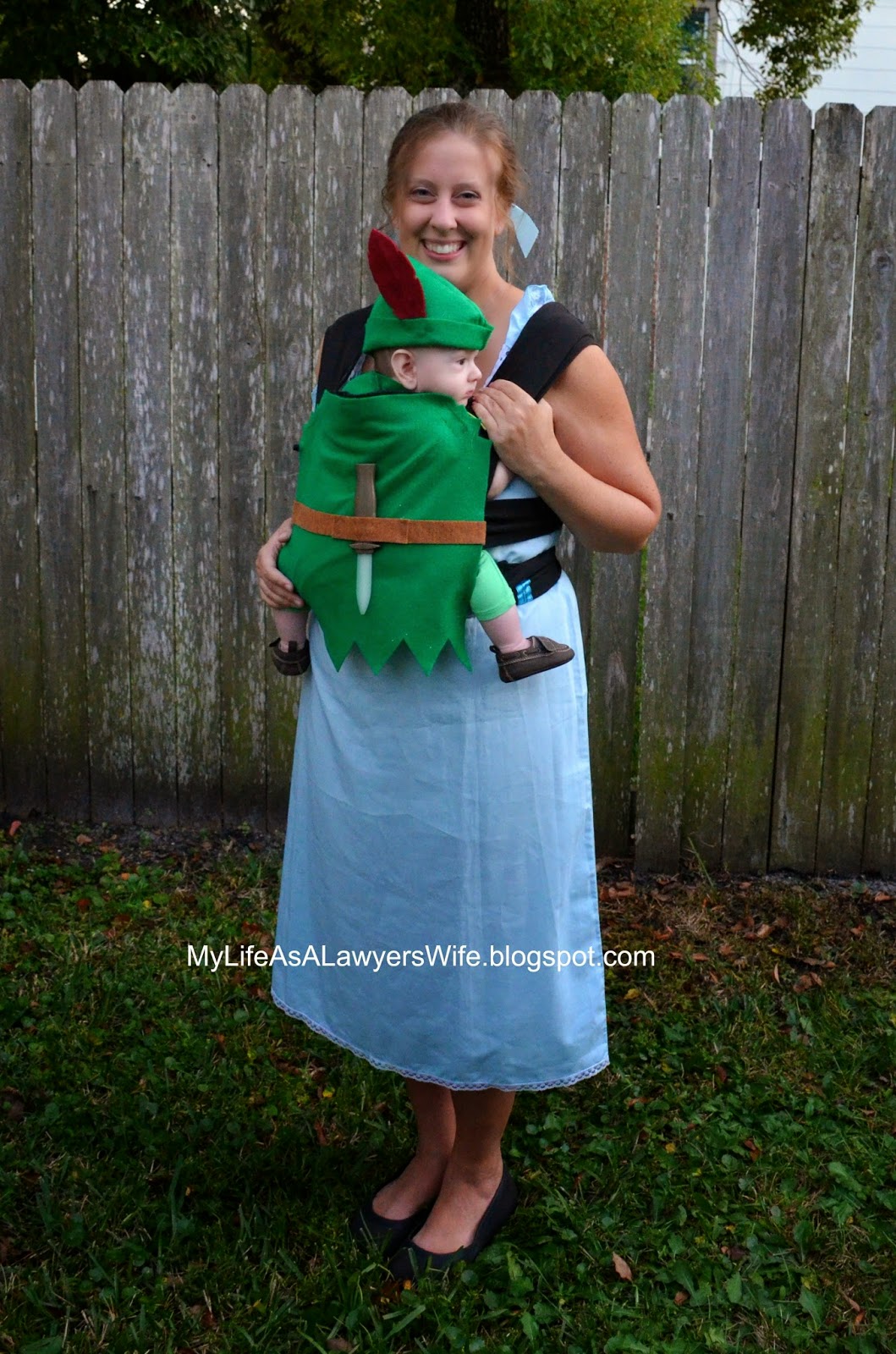 Full length shot of the costumed carrier in action! 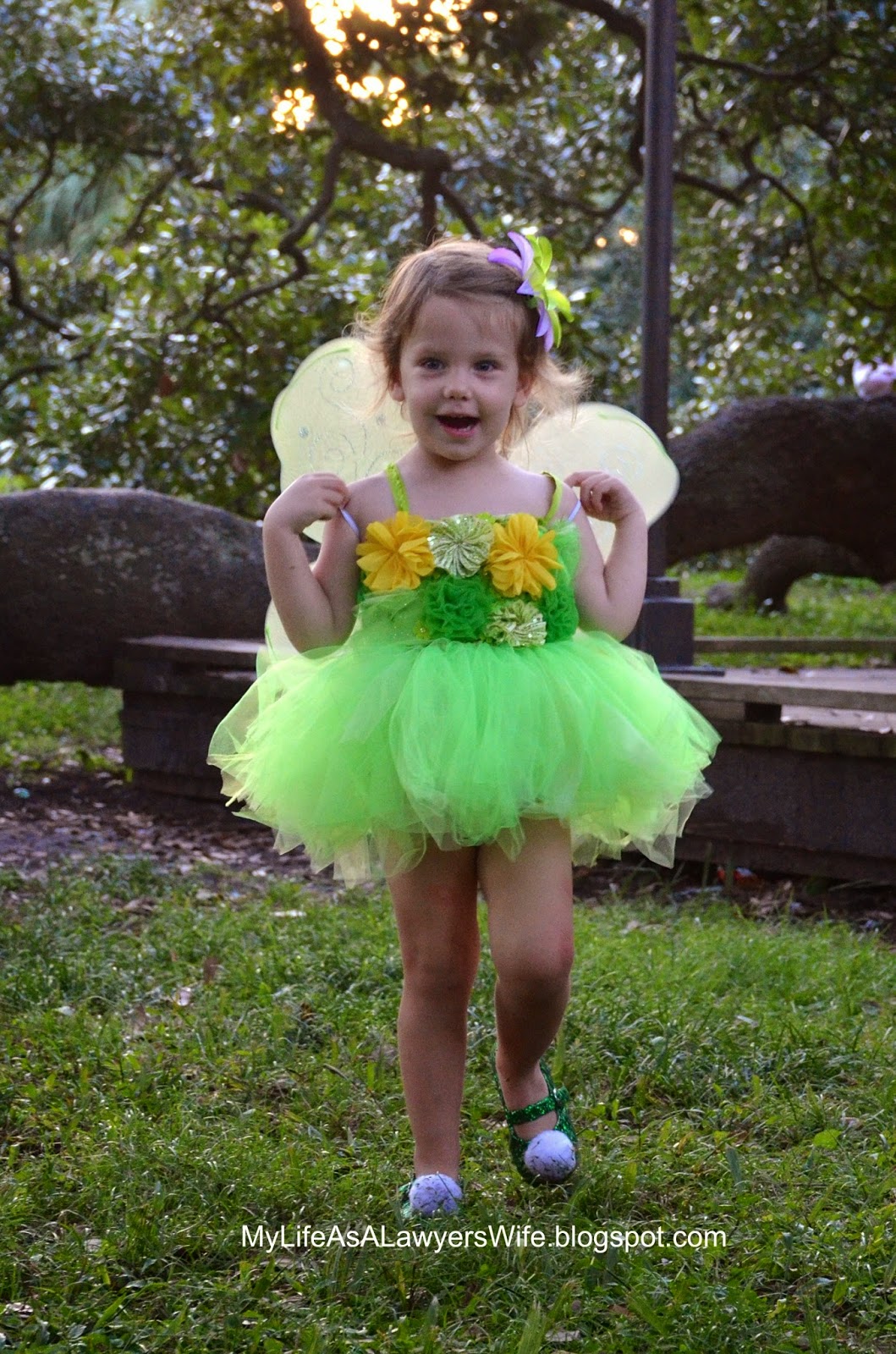 For Ellie's costume, I completely followed this tutorial. I ordered the stretchy headband (8" width) and most of the decorative flowers from The Hair Bow Company, but all other supplies came from Joann Fabrics or Michael's. Her wings were courtesy of the Dollar Store.

The finished dress, and a closer look at the bodice! (Please excuse the lousy iPhone photo.)

Back of the dress, and wings from the Dollar Store

To make her Tinkerbell shoes, I followed this tutorial. I lucked into a pair of plain white shoes at a consignment shop and fancied them up with glitter, Mod Podge and white pom-poms.

Unfortunately, Ellie liked the shoes pre-glitter more than she did when they were all Tinkerbell-ed up! I wasn't very careful with the glitter application, though, and I think some of it made it onto the top edges and possibly the inside of the shoe and it rubbed her feet. We ended up adding ruffly socks to help with that.

I finished the whole thing off with a cute hair flower clip from a consignment shop and she was just the prettiest little Tinkerbell! 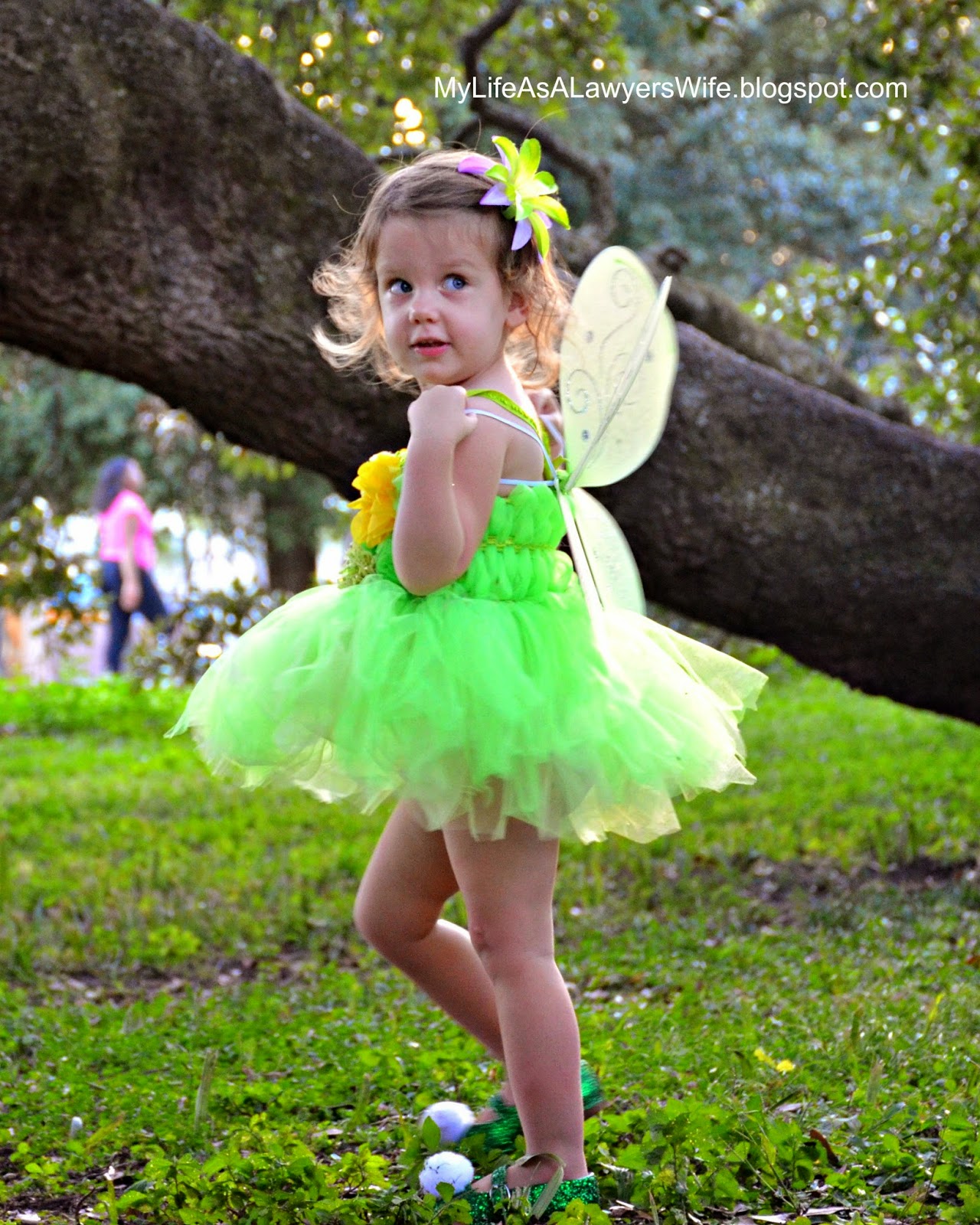 These costumes were all purchased, but fairly cheaply, so we felt good about that overall.

Wendy's nightgown was purchased on eBay for about $10. I wore it with black flats I already had and tied my hair in a curly ponytail with a blue ribbon. 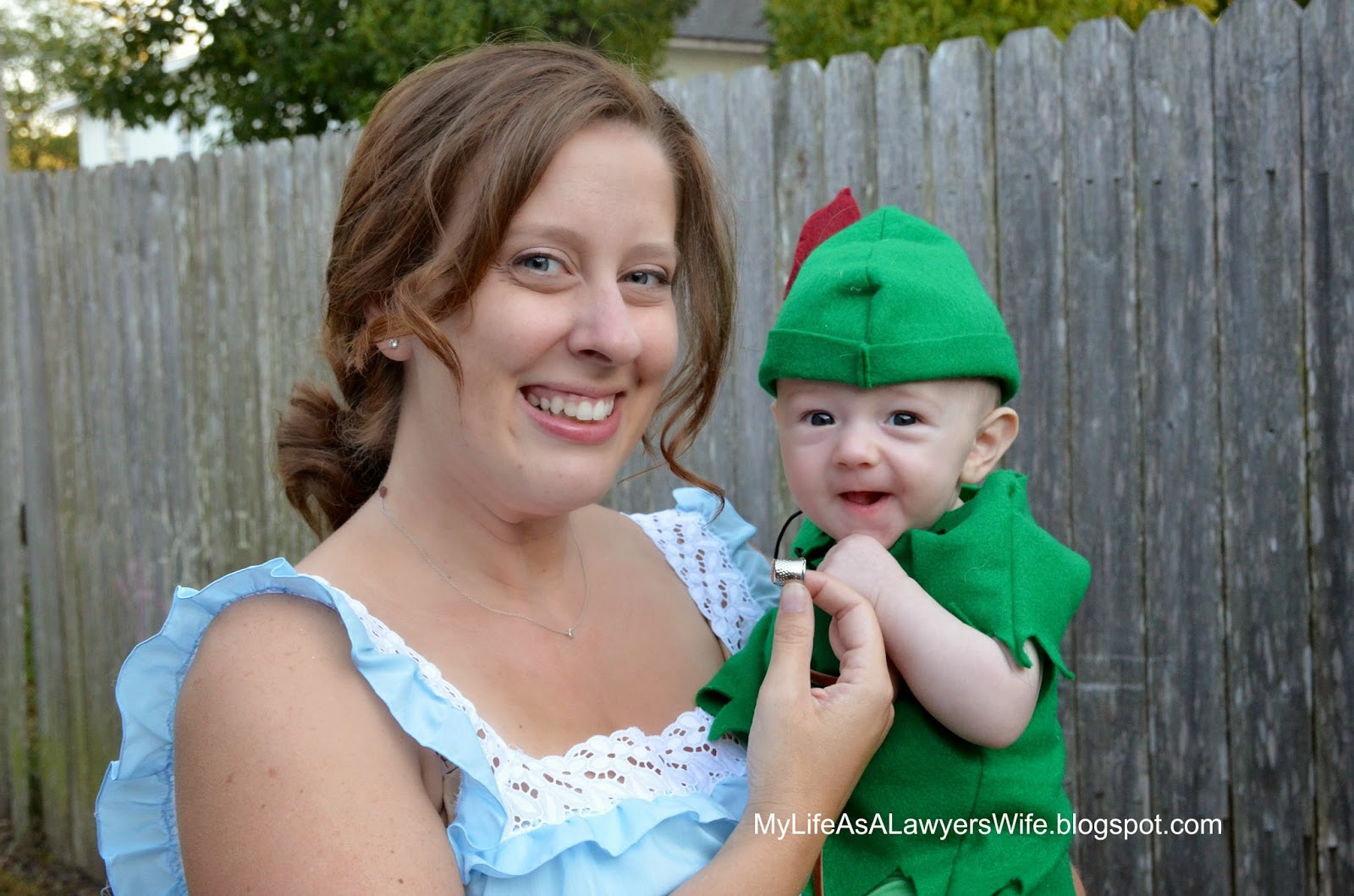 I didn't actually get any full-length shots of my costume alone, but I love this one with Peter Pan!

Captain Hook wore the Captain Blackheart costume, found at HalloweenCostumes.com for about $30. The hook was from the same website for $4. We found his wig at Wal-Mart in their Halloween section for about $5 and the sword at the Target Dollar Spot for $1 (obviously). He wore black pants and shoes he already had. 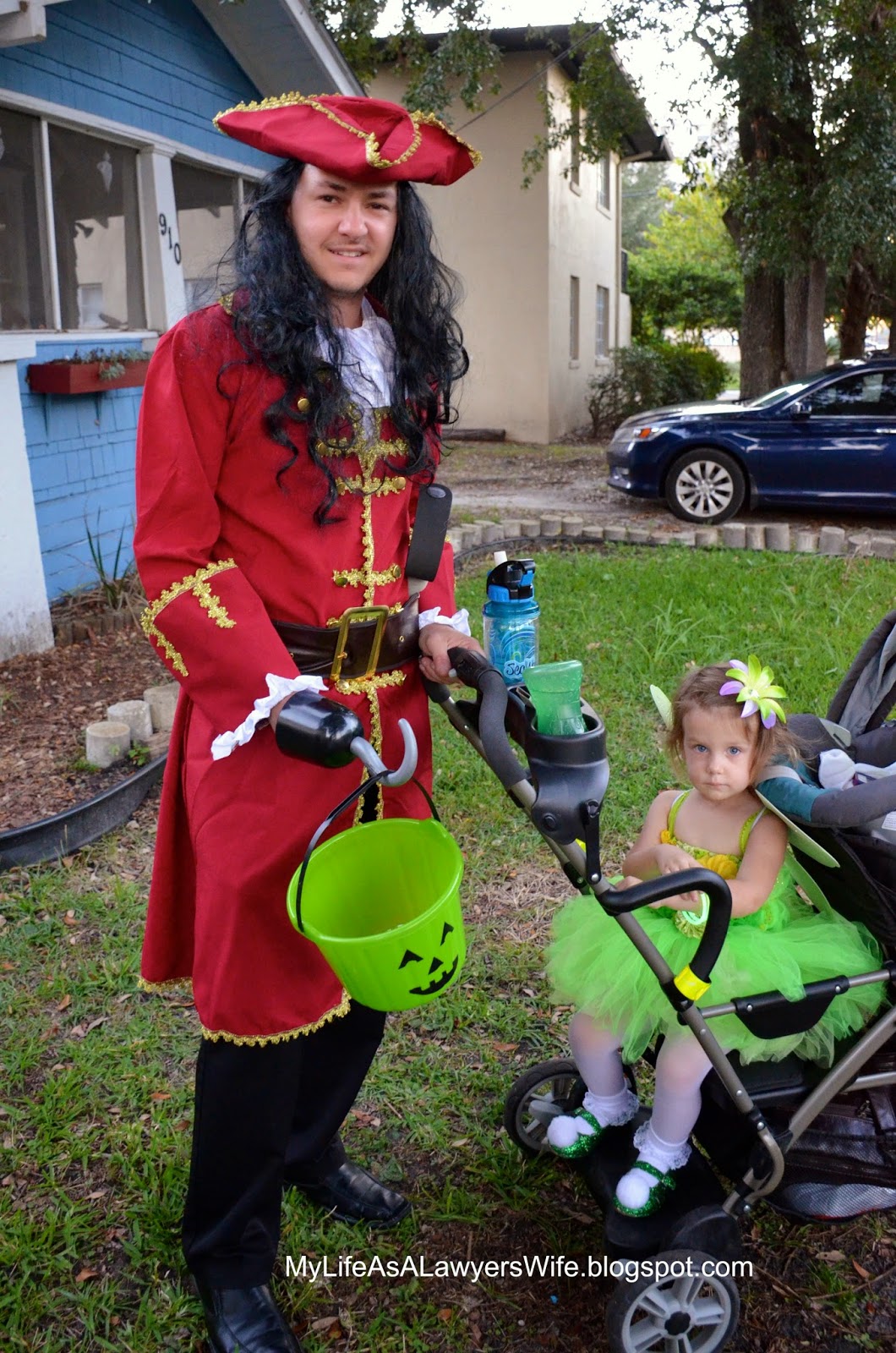 The Crocodile wore an alligator costume from Petco, although I can no longer find it listed on their website. He accessorized with a miniature alarm clock purchased on eBay for about $4. 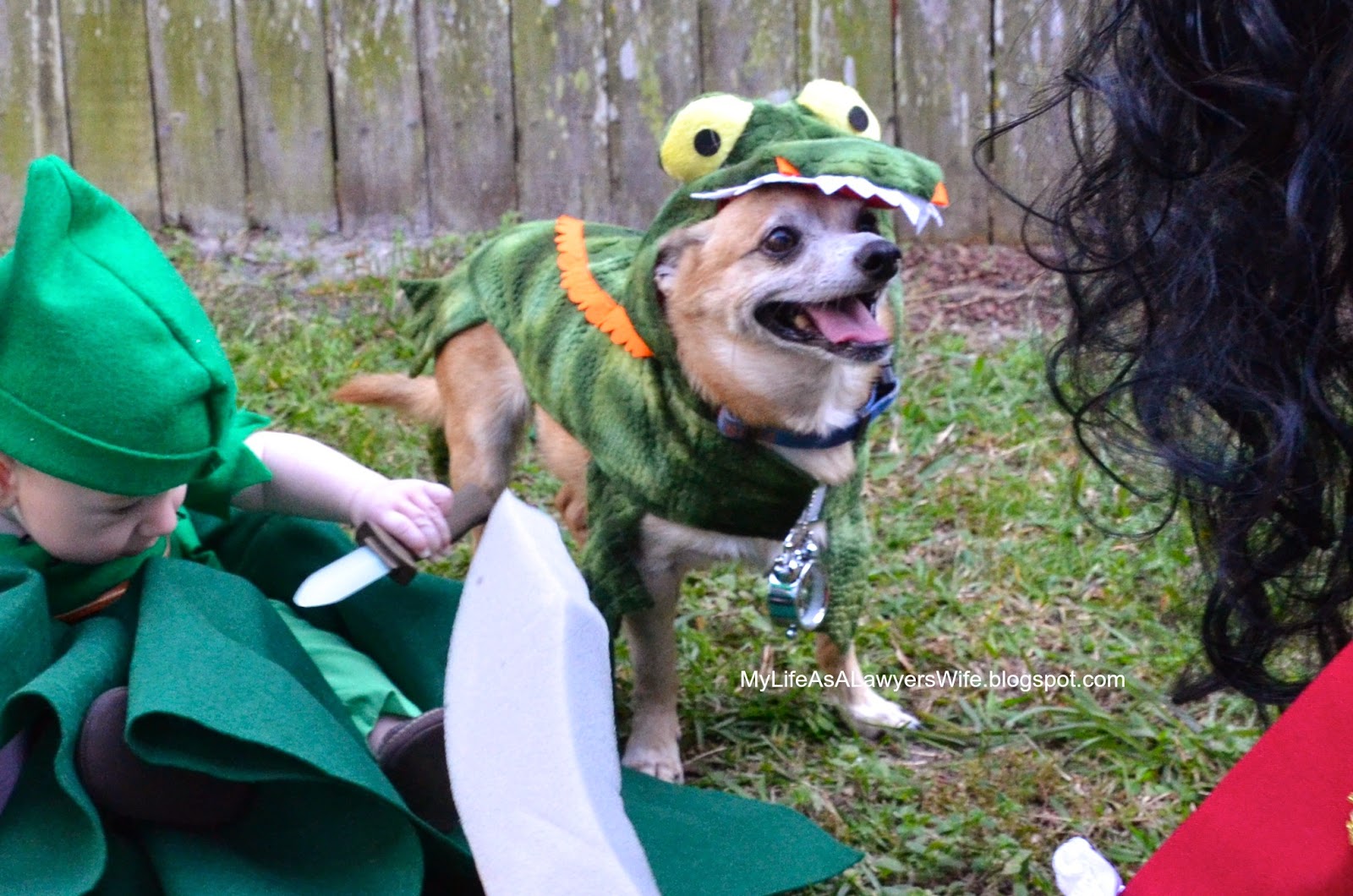 And that's that - Peter Pan family costumes! We were so pleased with the final result, and had such a great time putting it all together! 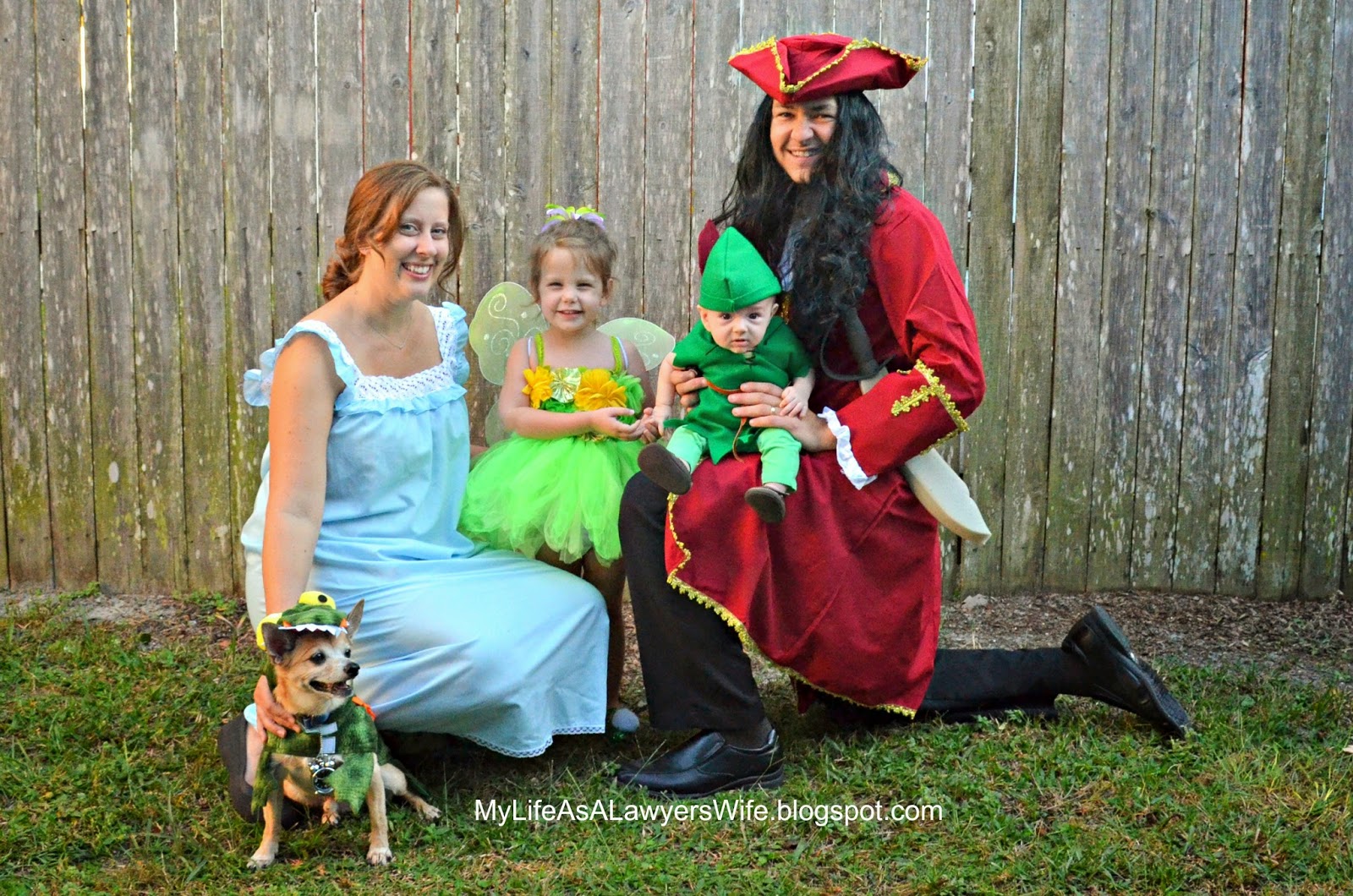 Now that we have recapped all of our Halloween celebrations, I wanted to talk a little more about our Peter Pan Family Costumes. We got a lot ... epeterpan.blogspot.com

**A NOTE ABOUT PICTURES**

Yes, I know. Most of my pictures are blurry. When I wrote all my posts (YEARS ago now), I hosted my photos on Photobucket because they offered free photo hosting for blogs. Since then, they have changed their policies and no longer will host photos for free (even for those accounts that signed up under those terms). Thus, all my old photos hosted that way are now blurred and watermarked. Unfortunately, I do not have the time to go back and change the hosting location of all the pictures to fix this right now.

So, my apologies. If there is a post that you would particularly like to see a photo from, you may email me at alawyerswife@gmail.com. Alternatively, most of my photos are also posted on my Shutterfly share site at mylifeasalawyerswife.shutterfly.com. They are organized in albums by date, so make note of the date of the post in question and you should be able to find what you are looking for.

Sorry for the inconvenience, and thank you for visiting!

Hi, I'm Meghan! I'm happily married to Eric, my high school sweetheart, and the proud mother of our four-year-old daughter, Ellie and two-year-old son, E.J. Our family (also including our chihuahua mix, Achilles) is currently in transition: we recently left behind Eric's law career and our home in New York City to return to our roots in Florida as he begins a new career in teaching through Teach for America. As for me, I am primarily a stay-at-home mom to Ellie and E.J., but I also do occasional jury consulting work. The original purpose of this blog was to keep our families up-to-date on our lives from a distance, as well as to document our life in the Big Apple, but now it chronicles our new adventure. Welcome! 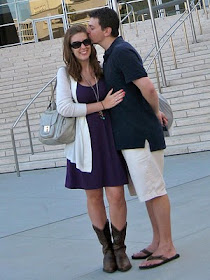 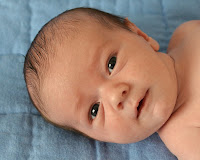 I'm All Over the Internet: